It is unclear to me why this psychopathic mass murderer is still walking free – the DOJ should be all over his case and should’ve been since years ago! Now finally we petition to prosecute him!

It turns out not only federally but even in the province of Quebec that otherwise has not signed on officially to the charter of rights, the peoples of la belle province can via a petition dismiss their failing government: 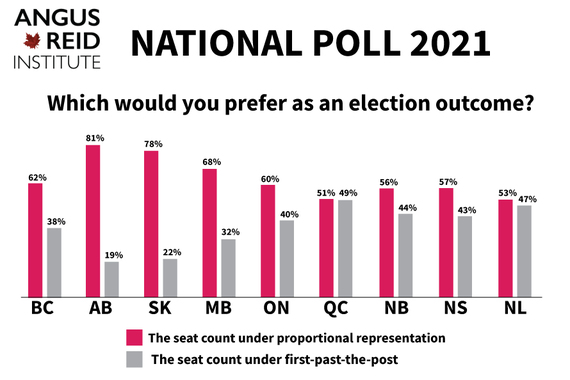 Today’s Angus Reid poll shows that three in five voters (61%) prefer the election results that would have been produced if their ballots had counted proportionally.

Supporters of a proportional outcome were a majority in every province.

Predictably, Liberal voters were less enchanted with this particular hypothetical outcome than others, considering first-past-the-post delivered their party a 45-50 seat bonus compared to the popular vote. Support was particularly high among Conservative (78%) and NDP (80%) voters.

Generally, polls ask Canadians how much they support the core principles of … Continue reading →

If all adverse vaccine events would be reported to VAERS that would result in 41 times more events, the Canadian researcher concluded.

A Canadian researcher has modelled, that 41 times more people are affected after the experimental injection  than are actually being reported to VAERS – the vaccine adverse effects reaction reporting system indicates that 150,000 Americans are deceased as a consequence of having received the experimental genetic injection. 

Talk about complete arbitrary abuse of authority and making millions dependent and addicted to the product, while turning a blind eye to gross human rights abuses, “the worst possible things one can imagine”!
https://youtu.be/_IhWeVHxdXg